We at VTEA provide comprehensive consulting and solutions to contain Harmonics in the electrical systems arising from the presence and installation of non-linear electronic devices. The team has an end to end understanding on Harmonic Mitigation to the levels, stipulated by the DISCOMS. We work closely with customers to carry out studies relating to harmonics at their sites and provide customized cost-effective solutions.

Electrical Loads can be broadly categorized into linear and non-linear loads. When the load draws a sinusoidal current at the same frequency as the voltage it is classified as linear load. Examples of linear loads are resistive heaters, incandescent lamps, and constant speed induction and synchronous motors.

Certain loads draw non-sinusoidal current from a sinusoidal voltage source. Such loads cause the current to vary disproportionately with the voltage during each cyclic period. These are classified as nonlinear loads, and the current taken by them has a non-sinusoidal waveform.

What are the industries effected by Harmonics?

Harmonic problems are now common in not only industrial applications but in commercial buildings as well. This is due primarily to new power conversion technologies, such as the Switch-mode Power Supply (SMPS), which can be found in virtually every

What are the effects of Harmonics in the system? 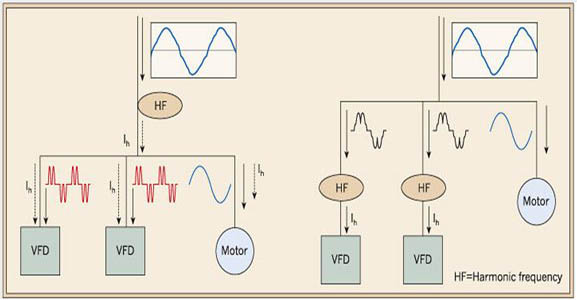 Harmonics overheat equipment by several means. For example, in electric machines and transformers, harmonic currents cause additional power losses by (i) increasing the eddy currents that flow in their laminated cores, (ii) through increased leakage currents across insulation and (iii) by producing skin effect in conductors.